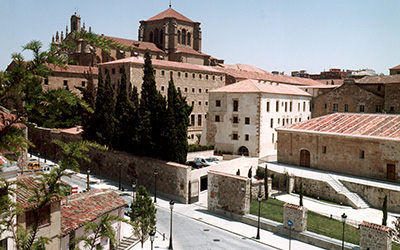 Hotel Palacio de San Esteban is located in the heart of Salamanca. Human Heritage City and destination that combines charm, tradition, history, magic and modernity. The building was originally the Convent of San Esteban, from the Black Friar’s order located in the central square of the Concilio de Trento. In its whole, the Hotel Palacio de San Esteban is a magnificent example between the charming hotels in Salamanca, where tradition and modernity live together, and where the fingerprint of history is alive in each detail. The location of Hotel Palacio de San Esteban makes it special amongst the hotels in the center of Salamanca as it is in the starting point of any rout around the city: five minutes from the Plaza Mayor, from the Cathedrals and the Plaza de Anaya, the Fonseca Palace or the Tower or Clavero, even closer. This romantic hotel in Salamanca is a true luxury. With 51 rooms that are an authentic tranquility haven, between thick century walls of stone. With views of the Cathedrals, the Patio de los Olivos or the romanic Cloister of the Convent of San Esteban. To stay in this luxurious hotel offers the possibility of walking around the same places that Francisco de Vitoria or even Cristobal Colón did.
Hotel Address: Arroyo de Santo Domingo, 3 Zip Code: 37001 Telephone: +34 923 262 296 Website: http://www.hospes.com Reservation Email: reservations@hospes.com

Various rooms with a capacity of up to 120 guests.
Natural Daylight
Possibility of having your event in the exterior surroundings of the hotel.
Audiovisual rental

From Hospes Palacio de San Esteban you can access on foot all the monuments in the center of Salamanca. Four minutes away from the hotel is The New Cathedral of the Assumption of the Virgin and Old Cathedral, headquarters of the Roman Catholic Diocese of Salamanca.
Also close is La Casa de las Conchas, a Gothic building with Plateresque elements. Its construction began in 1493, the patio archways, stairs and ceiling stand out.
From the Hospes Palacio de San Esteban Hotel you can also walk to the Plaza Mayor, the most emblematic place of Salamanca 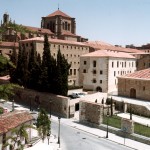 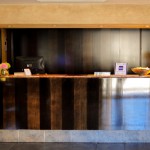 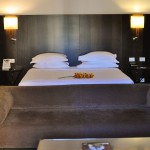 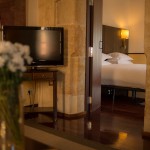 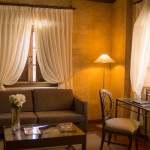 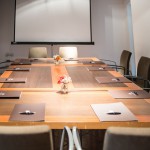 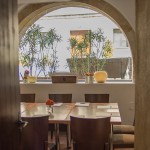